January 30, 2010
The photo today is grainy and blurry,
the result of scanning and trying to enlarge
a tiny photo taken by my paternal grandfather
Lloyd Arnett when he was a teen.
The man with the horse and buggy
is John James Madison Biggs.
Lloyd's mother was Mary Biggs,
daughter of John and his wife Dicy Reed Biggs. 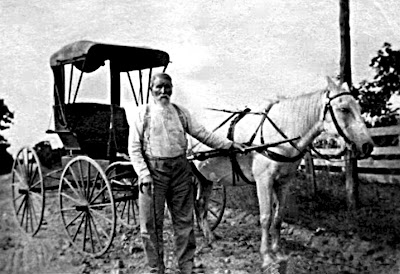 John James Madison Biggs was born March 5, 1837
in McCracken County, Kentucky to Elijah Biggs, Jr.
and his wife Mary "Polly" Brown,
the fourth of eight known children,
though there were said to be ten.
The family moved to Illinois when John was a boy and
his father Elijah died when John was only 12.
About a year later, Polly Brown Biggs married Larkin Cantrell.
For whatever reason, shortly after her marriage,
she farmed out the boys to a local Williamson County family,
J.W. McCreery and his wife.
All the Biggs boys were said to have served
in the Union army during the Civil War,
but I've never found John's records.
John married Dicy Caroline Reed
in Moultrie County, Illinois on November 25, 1858.
I don't know why they married there,
as I can't establish a connection between Moultrie County
and either the Reeds or John Biggs.
In 1860, they were living in Fayette County, Illinois
near Dicy's parents, Abner Reed and Temperance Moutray Reed.
I can't find hide nor hair of them in the 1870 Census,
but by 1880 John and Dicy were living
in McDonald County, with their five youngest children.
Their eldest daughter, Mary, my great-grandmother,
had already met and married Anvil James Arnett.
She was 13 years old when she married.
(Can you imagine?)
John and Dicy continued to live in McDonald County
until their deaths, as far as I know. They're
both buried in a church cemetery in Rocky Comfort.
Dicy died in 1912.
John died in 1924.
But here's the weird thing:
apparently neither died in Missouri,
unless they died under assumed names.
There are no Missouri death certificates for either,
though they were required in that time period.
About half their kids were living in Missouri;
half in Oregon, but they didn't die in Oregon either.
It's a mystery.
I figure that the horse and buggy shot of John Biggs
was taken around 1920, about the same time
as this photo of John and his older brother,
Christopher Columbus Biggs. 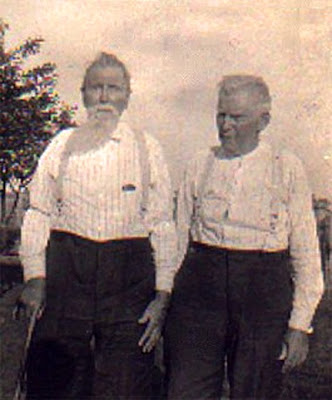 Kat Mortensen said…
Sorry, Meri! I was out when your comment came in and only just got it a short time ago. I have added your link and put up a new post to notify Sepia Saturday people that there are new things to read.

I'll be around to read this at length when I get the chance.

Evelyn Yvonne Theriault said…
This is not that bad an enlargement at all.
I especially like seeing the detail on the carriage. I have a postcard collection of dog carts of Quebec so I've become a little obsessed with the different (traditional) styles of carts and wheels.
I'm glad to have met you through Sepia Saturday and I'll be back for another visit later this week.
Evelyn in Montreal
January 30, 2010 at 6:38 PM

Barry said…
Clearly you have a mystery on your hands. But the photo came out quite well, even enlarged.
January 30, 2010 at 6:57 PM

L. D. said…
This is all very interesting. You have a nice blog here. It is nice to be able to search and find things that one would never dream that they could. The parents surely wouldn't have moved to a family members because they were so sick? No one to ask now of course. Nice mystery.
The buggy and horses is really a good shot of the times with John.
January 30, 2010 at 7:52 PM

Nancy said…
Interesting. My husband has "Biggs" in his background. I ask him if it was his father or his mother. His father is from Kentucky and his mother (age 97) was born in Oregon. I'll bet when you whittle it down, many of us are related in some way.
January 30, 2010 at 10:08 PM

A.Smith said…
I love mysteries like this one. Now of course with this magical tool research is easier than in the old days when writing to municipal employees and churches and the like trying to unravel the different balls of yarn that the past created when people moved from one place to another was a matter of hitting the jackpot if one found a person willing to check the information available for you.

Kat Mortensen said…
I just love the names of these people from your family, Meri. "Dicy" - I've not heard that one before and Larkin Cantrell sounds like he just stepped out of the pages of Zane Grey novel.