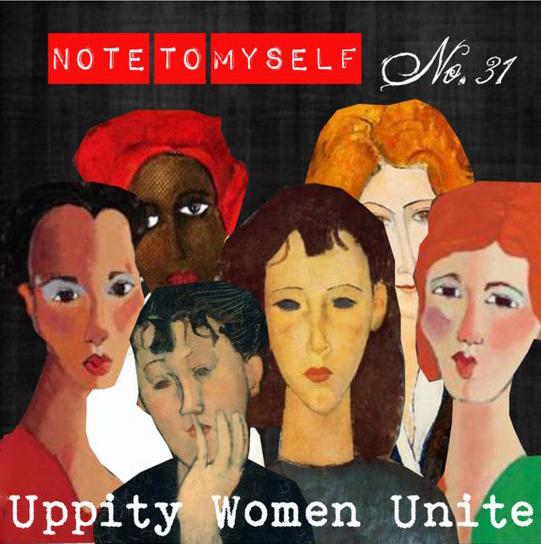 This was a popular slogan in the Women's Movement
during the early to mid-1970s.

Poking fun at ourselves for being uppity. . .
thinking that we had the right to be considered
the equal of men
(including men who would never be our equals).

Another way those of us living in Dallas
displayed a bit of humor
was by members of the Dallas NOW Chapter
entering the cooking contests at the Texas State Fair.

My ribbons were in my kitchen,
framed and under glass,
for many years.

I consider the drop cookie ribbon
the most coveted one I have
because the competition was fierce. . . .
hundreds of cookie makers entered.

I was a little disappointed not to win
Best in Show
for that fruit salad,
and one of the judges told me
that there had been a dispute
between the judges,
the majority of whom ended up
going for a Waldorf salad
because it was cheaper to create
than my beautiful
strawberry-blueberry-pineapple-pecan
and I don't remember what all else,
all served up in a scooped out pineapple
laid on its side with the fronds still attached
and laid on a bed of red leaf lettuce
on a footed sterling silver tray.
(Beautiful presentations counted,
as I found out when I placed my potato salad
on the competition table the first year I entered.
It was in a fluted blue hobnail glass creation
made for desserts, a lovely thing,
but the first and second place entries
dolled their potato salads up
like they were walking the catwalk
in a couture collection fashion show.)

As for spectacular desserts,
who knew you could win a second place ribbon
the first time you ever made cream puffs?
They were light and fluffy, for sure,
but I think it was the homemade French vanilla filling
that did the trick.
I've not made cream puffs since then.

"I cook for ribbons."
Well, that and needing to eat
something besides Cheetos.

And I'm still collaborating with
other Uppity Women.