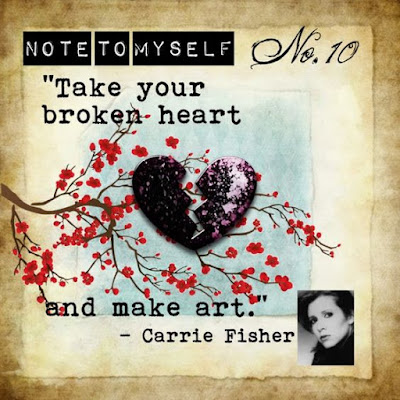 Meryl Streep's impassioned words
in her speech at the Golden Globes last night
resonated with me
(as they would, since I'm not a Trump fan)

but what really stuck was the quote
she attributed to her dear friend
Carrie Fisher (a.k.a. Princess Leia)
who died in December following
a catastrophic cardiac event at 60.

"Take your broken heart," she said,
"and make art."

When, in 2003, my heart was so badly broken
that it felt like a catastrophic cardiac event,
I was flattened by grief and loss.
In other rough periods throughout my life,
writing had been cathartic.
Getting words and feelings on paper
had prevented them from being trapped inside me.

But then, words seemed positively meaningless.
I was adrift on a sea of abject sadness
and unable to grab hold of something
that had always been a life preserver:
putting words on paper.

Because there was nothing else to do
(well, there was fretting and crying,
but that goes without saying)
I waited.

Waited for that small voice inside
to give me direction
when I didn't know which way was up.

Slowly, infinitely slowly,
I recognized that the sense of being mired in place
was lifting and some kind of insistent creative urge
was taking its place.

Because I'd always processed feelings
and experiences via words,
I had to feel my way along,
learning a new vocabulary of expression.
One where images took the place of the trusty friends
who had flown away
like birds heading south for warmer climates.

I started with teaching myself to manipulate
images on the computer
and then. . . . most hesitantly,
I bought yards of raw canvas, and jars of acrylics,
and began to paint.

I turned my broken heart into art,
like Carrie Fisher commanded,
and it saved me.
It took me from tears and a feeling
that I was someone's left over garbage
to triumph.

It might not have been great art,
but it was art nonetheless. . .
an authentic representation of my interior journey.

I had some of the pieces stretched and framed
and they still keep me company today
to remind me that art can be tranformative,
both to the creator and the viewer,
and that broken hearts can mend
even if it takes an ungodly amount of time.