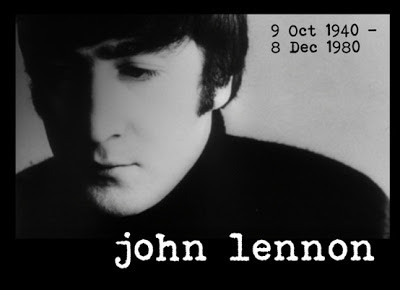 I remember waking up to the news
and feeling stunned.
Horrified.

It angered me that such senseless acts of violence
existed and that this cultural icon's life
ended in such a gruesome and tragic way.

It felt so personal.

When the Beatles first invaded American shores,
John wasn't my favorite Beatle.
I'll freely admit to being into cute. . .
and cute described Paul,
even if he was way too old for me
(though these days it seems that
the only men interested in me are way too old.
Go figure!)
But John's irreverent wit, his brilliance,
his quirkiness, his activism, and his heart
won me over.

To this day, listening to Imagine makes me cry.
It was John's best-selling single and
Rolling Stone named it # 3
on the list of 500 Greatest Songs of All Time.

Rolling Stone described the lyrics as "22 lines
of graceful, plain-spoken faith in the power
of a world, united in purpose,
to repair and change itself."

The song was not without vociferous critics, however.

It was called "the most subversive pop song recorded
to achieve classic status."

Conservative commentator Ben Shapiro
held nothing back when he opined:

"There are no words for how truly evil and terrible this song is ...
utter and complete rubbish ... It's vomit-inducing bad ...
It commits the worst musical sin: it is completely boring ...
But that's not what makes this song so horrible.
For that, we have to examine the lyrics,
which are not just ignorant, but Soviet-style ignorant.
It's a communist, atheist song, pure and simple ...
no borders, no God, no meaning, no values, and no wealth.
And it's being penned and sung by
one of the richest people on the planet.
Despicable as art; despicable as politics."

If it makes you feel any better,
I also cry every time I hear
that non-Soviet song
Woman.

And anyway,
my point is (besides paying tribute to Lennon)
to spread his message

Jade and Co. said…
Lovely tribute & poly art! The news of his untimely death will always be in my memory, too. I was in the 4th grade & I remember feeling so sad for his little one, Sean. I became curious about his life & it lead me to The Beatles. Thus, began my love affair with The Fab Four. The gift of his music lives on. Thank you for sharing your tribute. Peace & Love.
December 8, 2012 at 5:22 AM

Anonymous said…
i grew up listening to my parents' records of the beatles and the songs have many special memories of childhood.
December 8, 2012 at 8:56 AM

Priti Lisa said…
Brava!
You are divine.
John spent his time on earth so well.
I think how frustrating it must have been for him to be so misunderstood...or I guess the real word is feared. He was feared for choosing love.
Happens to a lot of saints.
♥♥
December 8, 2012 at 9:06 PM

Kat Mortensen said…
A great tribute. I remember that morning too-- hearing the news on my little bedside cube radio. I was quite young in the Beatles' heyday, but of course, I knew the songs as I grew older. Not a particular fan of Lennon's at the time, but was just coming to appreciate him and had even recently purchased the DOUBLE FANTASY album when the news came.

Tattered and Lost said…
I was living in Los Angeles at the time and remember not being able to sleep that night. And when the day came for the moment of silence it was amazingly silent at my very large apartment complex. It's still incredibly painful.
December 9, 2012 at 10:20 PM

Dawn Elliott said…
Mari,
Your tribute to John is so incredibly thoughtful and moving...he did, indeed, stand for so much of what many of us believe to the core...such a sad end for such a gentle man...
December 10, 2012 at 9:02 AM